The movement of ​bulk material​ is a crucial feature in today’s industrial processes. The demand for greater accuracy in analytical instruments has prompted the automation of sample and solution preparation based on the more accurate ‘solvent weight’ to ‘sample weight’ gravimetric feeder method.

A gravimetric feeder is a self-calibrating feeder system that doses based on the weight in speed. Dosing is significantly influenced by the type and properties of the input material, ambient conditions like temperature, humidity, etc. as well as the type of dosing device. Dosing systems dispense predefined amounts of material in a specified time period in a defined ratio. In gravimetric systems, the recipe is based on the mass, not the volume, of the chosen ingredients. A gravimetric feeder consists of control and local panels, load cells to measure the load, a digital tachometer to sense the speed of the belt and a belt feeder conveyor shaft driven by an AC motor coupled through the gearbox. Depending on the entire process, the gravimetric feeder may either be a loss-in-weight system or a gain-in-weight system.

Loss-in-Weight Feeder Overview
Loss-in-Weight feeders, first introduced in the 1950s, are widely used to provide reliable and consistent material delivery for a variety of challenging material-handling applications. Continuous innovation from several well-respected suppliers has enhanced the original design concept and expanded the range of applications that fit comfortably within the technical limitations of the technology.

LIW feeders consist of a volumetric feeding subsystem (auger-type, vibratory, belt, or liquid discharge device), a scale subsystem, and a controller which monitors the live load information coming from the scale subsystem (see Figure 1). Various optional configurations provide material conditioning, agitation, dust-control, and communication with other plant systems. The LIW feeder is typically refilled by a much larger storage hopper that provides on-demand replenishment of material to the weigh-hopper. The control unit of the LIW feeder monitors the discharge rate of the feeder and adjusts the motor of the volumetric feeding subsystem (typically using a PID control loop) to ensure the discharge rate matches the desired rate – or setpoint. This rate could be a fixed discharge rate, or it may be a dynamically varying rate determined by an upstream “master ingredient” or an algorithmic setpoint established by a plant DCS system. Most applications requiring a LIW feeder have critical accuracy requirements and consistent, reliable material flow must be maintained throughout the gravimetric cycle. The feeder must periodically initiate refill operations from the supply hopper and ensure consistent discharge during this time when “live” weight data is not meaningful.

The controller unit of the LIW monitors the live weight data being reported by the scale, controls the speed of the feeder’s motor and ensures the loss-in-weight matches the desired setpoint. This rate could be a fixed discharge rate, or it may be a dynamically varying rate determined by an upstream “master ingredient” or an algorithmic setpoint established by a plant DCS system. The controller monitors the amount of material in the weigh hopper and initiates a refill at the appropriate time to ensure continuous, uninterrupted operation. 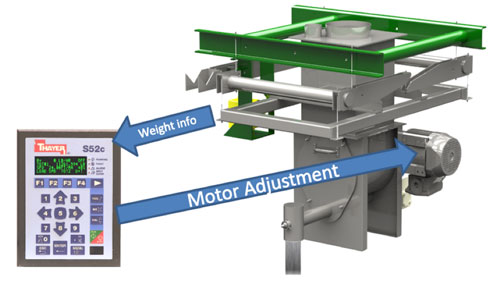 During refill the feeder will operate in “Volumetric” mode to ensure consistent material delivery. When the refill is complete, the controller monitors the feeder and once the feeder has settled it resumes “Gravimetric” operation. Most modern Gravimetric feeders will automatically adjust for the abrupt change in density resulting from the refill operation. 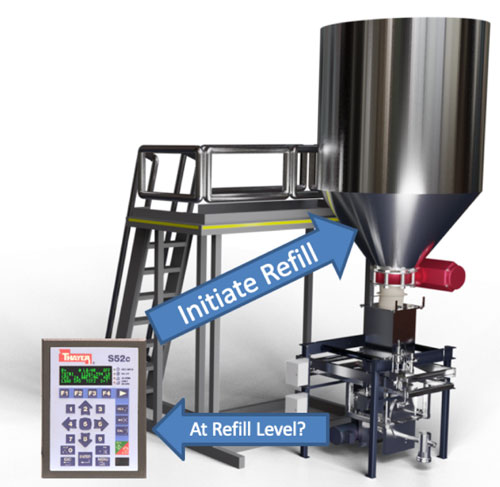 The controller monitors and controls the live load to deliver a consistent feed rate. During Refill, the live load data is unavailable and the controller PID control loop is temporarily bypassed resulting in a consistent screw motor speed. The Thayer Scale Loss-in-Weight controllers operate in a mode called VOLM which enables the feed rate to respond to setpoint changes.

As the hopper empties, the controller accelerates the motor speed to account for declining density. 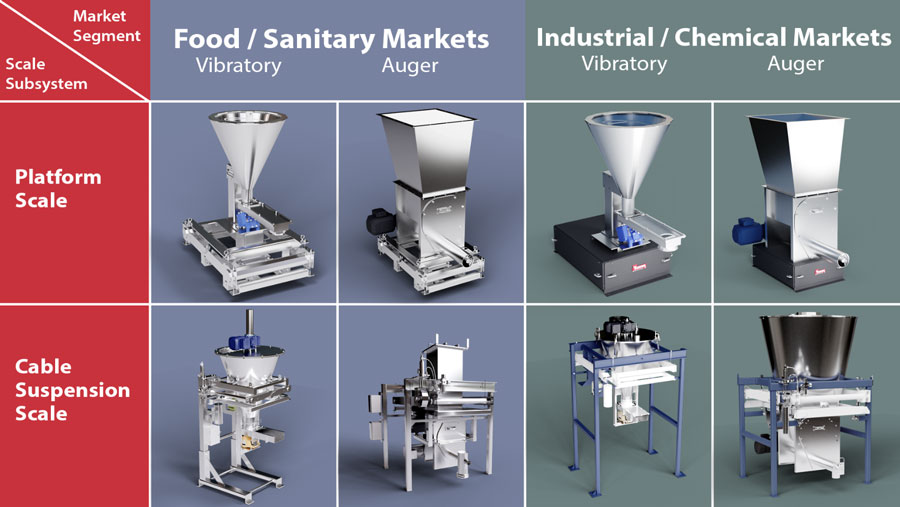 Why Select a Thayer Scale Solution?

How easy is it to maintain?

The maintenance of gravimetric feeders requires sophisticated diagnostics equipment, familiarity with PLCs and system programming. Gravimetric dosing systems are more expensive, sometimes two or three times more expensive than a similarly sized volumetric design, depending on the operating requirements of each. You, however, will save on costs in the long run due to the lower use of expensive additives.

How accurate are the feeders?

A gravimetric system provides a great deal of feedback in terms of control, record keeping and inventory control. For instance, if a manufacturer is expected to provide on-going process documentation or validation to consumers, then gravimetric control will be deemed necessary.

In today’s highly competitive industrial market, ensuring feeder accuracy is central to guarding against wasted material and rejected product. To guarantee an accurate, reliable and cost-effective solution to any feeding problems, gravimetric feeders are the best choice.

Why select a Gravimetric Feeder

Understanding the differences that exist between gravimetric and volumetric feeders is of utmost importance as it helps processors select and implement the best type of equipment for their application needs.

Volumetric systems dose material according to the volume it occupies, i.e. space. The discharge rate is controlled by the feeder speed, which the operator calibrates. Volumetric dosing systems, therefore, cannot automatically adjust for fluctuations in properties such as input material bulk density. It needs to be recalibrated every time a new material or batch is introduced to ensure that the correct mass is dosed over a set period.

Volumetric feeders can produce precise discharge rates under certain circumstances-a dry solids material with a constant density and immune to ambient conditions (temperature and humidity). Adding optional devices to volumetric feeders can also improve process control; however, they have certain limitations and can’t replicate the results achieved with a gravimetric system.

Gravimetric systems, on the other hand, feed by weight and use process feedback to make continual operating adjustments for fluctuations in material density and ambient conditions. You are in complete control of the quality of your final product. It uses one or more integrated weigh cells to adjust for density variation. Mass is the only parameter considered, and the result is a precise feed rate, generally 0.5% to 1% or better. An added benefit is that you can say with certainty how much material, by weight, is used, which is an essential factor for quality management and inventory control purposes.
Gravimetric feeders are closed-loop capture meaning they document moment-by-moment feeder performance during continuous process operations. The system makes the required operation adjustments and provides precise feed rates and an immediate alert if there is any interruption to material flow.

The latest
News from
Thayer Scale
in your inbox.

Sign up to receive
news about our
equipment, events,
resources &
successes.

Please wait, the PDF is Downloading...

We use cookies to ensure that we give you the best experience on our website. If you continue to use this site we will assume that you are happy with it.OkNoPrivacy policy