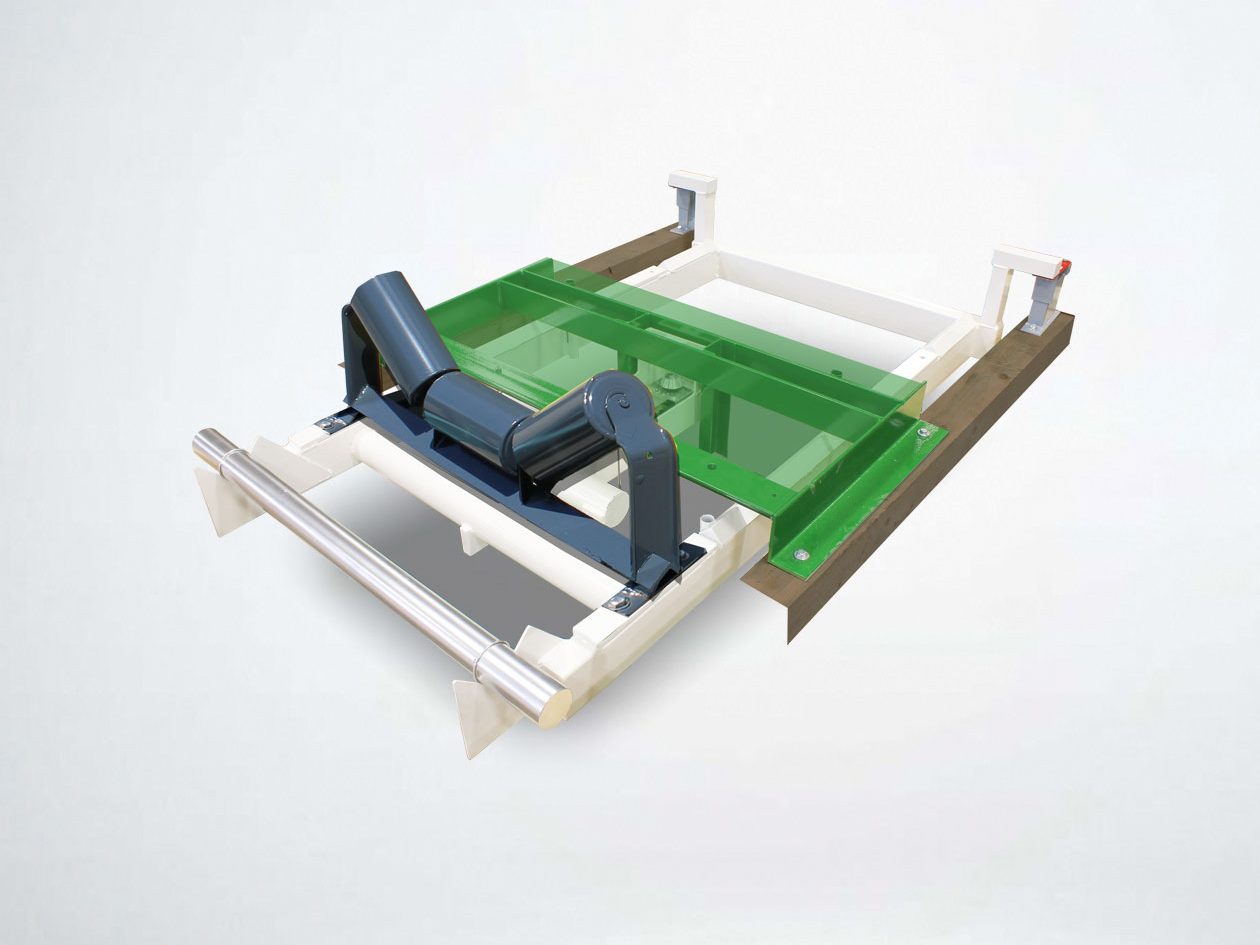 Originally Thayer marketed and sold a TT line of premium conveyor best scales. In 1965, Thayer introduced what would become the de-facto standard for Conveyor Belt Scales known as the “Thayer RF” model. When the RF was first sold we decided to market it as a lesser accuracy, lower cost belt scale so as not to compete with the premium “TT” series. However, it quickly became apparent that this scale actually outperformed our higher priced scale in accuracy and, in particular, long term stability. Since both scales used the same line of load cells and the same integrator, the difference in performance could only be attributed to mechanical design differences. After extensive study, we concluded that this new suspension design using the combination of the “rocking flexure” pivot and stainless steel cable tension links was responsible for the improvement. One of the greatest benefits of the new design was its ability to function accurately while mounted to a flimsy, distortion-prone base structure which is not uncommon.

In 1970 Thayer Scale devised its “see-saw” calibration lever arrangement initially deployed on 6,000 TPH belt scales engineered for Bethlehem Steel. These used a single test loading bar that could be handled by a single operator. This unique approach eliminated the need to place thousands of pounds of test weights on the suspension system or resort to heavy calibration chains that are difficult and sometimes dangerous to apply. Since calibration could be performed quickly and easily by a single operator, there was no need to provide “resistor” calibration, which at best checks only the calibration of the electronics. The test bar could be located on the lever in one of two positions. In the normal operating position the test bar acts as a mass counterbalance enabling empty belt zeroing and normal operation. In the calibration position the test bar’s mass counterbalance effect is negated and the bar exerts an additional loading effect by virtue of its new position on the lever. This unique design has become standard on all Thayer heavy-duty models, including those approved by NTEP for commercial weighing applications.

This scale, known as the Thayer 6RF conveyor belt scale, has been the company’s premium high accuracy scale ever since. Typically 30 feet long, this large suspension system has been installed in many installations in the U.S. to meet the commercial weighing requirements as outlined in the National Bureau of Standards Handbook 44. It is with great pride that we can say that we have never failed to achieve material testing certification on one of our many 6RF installations. We know of no other belt scale model anywhere in the world that can make such a claim.

When you buy a conveyor belt scale from Thayer Scale, you receive much more than just a load-cell supporting a conveyor idler. You will receive a total equipment “package”. This package consists of a custom-engineered scale suspension system that has been designed to meet the unique operating environment of your conveyor, a load cell designed to provide optimal utilization, overload protection and noise immunity, a belt speed measuring wheel designed to ensure optimal contact pressure with the belt, low material build-up and accurate speed measurement under various tensions, a Controller or Integrator instrumentation system with patented, and proprietary software features such as Scale Location Compensation and “Virtual Weighspan” and a proven and practical mechanical calibration arrangement that allows a single operator to apply the calibration loading weights to the scale either manually, or automatically utilizing our Automated Test Weight Lifter assembly. Attention to the tough problem of “calibration” is one of the things that makes Thayer unique in the marketplace and is one very big reason to specify a THAYER Conveyor Belt Scale.

The latest
News from
Thayer Scale
in your inbox.

Sign up to receive
news about our
equipment, events,
resources &
successes.

Please wait, the PDF is Downloading...